When asked why he got into flying drones, one presenter at the International Drone Day event in Boston simply responded, “I’m a geek.” He then pushed his glasses up to the bridge of his nose and went on detailing his drone’s features.

“I’m a geek,” one presenter said when asked why he started flying drones.

His model, a 3DR IRIS+, sat alongside the other drones on display. The IRIS+ is a medium-sized drone comparable to the DJI Phantom, but drones of all kinds were there. Some could fit in the palm of a hand, while others looked big enough to carry a small child.

He explained the motors, circuit boards, batteries, cameras, and software. “I plan to 3-D print a mount for my tablet above this [first-person-view] display,” he said, pointing to a monitor.

There was a good crowd of geeks, photographers, programmers, and reporters gathered in Boston in a conference room to talk about drones.

In major cities all over the world, people are celebrating International Drone Day to meet other drone enthusiasts and spread the message that, “Drones are Good.” There are over 130 teams participating in the day.

It is good timing for such an event. Drones are all over the news. Pakistan’s drones are now able to fire laser guided missiles. The U.S. Secret Service is testing drone-jamming technology. And drones were banned from flying at the South by Southwest festival. 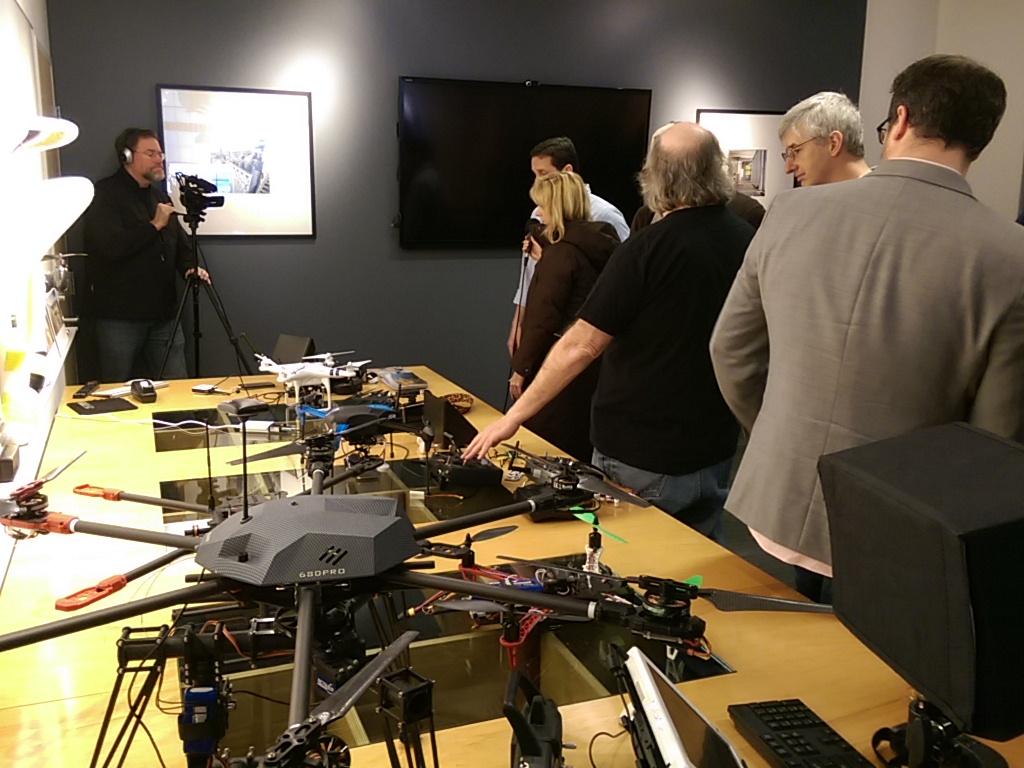 The crowd mills about the drones while presenters give interviews.

There is no denying that drones, quadcopters, unmanned aerial vehicles, and remotely piloted aircraft catch a lot of flack. It shows in public opinion. When it comes to drones, recent polls show that Americans are pretty skeptical about the commercial use of drones, and a large majority of the U.S. just doesn’t trust them. One poll showed that 64 percent of Americans would rather that their neighbor not have a drone.

Despite what the masses may want, drones are most definitely on the rise. They are becoming more and more popular all over the world. And although the Federal Aviation Administration has banned the commercial use of drones, the truth is that people are already conducting business with drones without the FAA’s explicit blessing.

There are many photographers and videographers that depend on drones for their work. Many such professionals were at the event displaying their tools and their footage. Craig Capello of Around about Town Studios said that drones were necessary to his job. It is all about getting, “that great shot that nobody else can. Well, nobody used to.”

Videos taken by drones and footage caught on first-person view (FPV) cameras have been attracting lots of attention. More people are buying drones than ever before. Many may remember the Star Wars-style racing video we posted about a few weeks ago. This kind of media is what first interested people like Dave Shevett, and prompted him to start the U.S. Drone Racing Association. When it comes to drone popularity, Shevett says, “The last three to four months have been exploding.”

A young reporter dons a pair of FPV goggles to get a drone’s perspective.

The FAA has been busy keeping up with the rise of drones. Civil society is advancing technology’s frontier faster than the FAA can effectively provide law and order. Yet this does not stop the government from trying to maintain some rule.

Recently, the FAA sent an unprecedented cease-and-desist letter to Jayson Hanes who posted a video on YouTube that was taken from a drone. The advertisements placed at the beginning of the video generate some revenue, and that is considered a commercial use of drones.

The letter exemplifies the legal grey zone surrounding those who work in the drone industry. What does and does not count as commercial use is not clear. If putting a video on YouTube is a commercial use of drones, what does the FAA have to say about the New York City Drone Film Festival?

Whatever the answer may be, no aerial photography business wants to be grounded by the FAA. So, drone pilots try to avoid detection and fly under the radar.

In fact, many businesses that use drones eagerly await clear-cut regulations. But for now pilots try to be as careful as possible. “I always fly by AMA rules,” Eli Schwartz of Near Photography said, referring to the Academy of Model Aeronautics’ code for flying remote control aircraft. “I want to be a responsible pilot.”

Schwartz said that if and when the FAA comes out with a license for commercial drone operators, he will be the first in line to get his.

While there are plenty drone enthusiasts who desperately want their vehicles to be used safely and legally, there are still trouble makers.  But as long as there are no set drone regulations, every drone pilot will continue to feel like a bit of an outlaw, even if he or she is just a geek.